sparking conversations about race and racism, for the South Asian Community

Desi Discourse is a grassroots project intended to explore and explicitly discuss the unvoiced biases within the South Asian community and serve as a call to action for the South Asian community to take on a more active role against discrimination and racism in the US. At present, Desi Discourse have two realized products: The Desi Discourse Podcast, the organization’s flagship product aimed at promoting reflection on Anti-Black biases and pushing individuals to learn more about systemic racism, and the Conversation Guide, a tool for our users to facilitate and host more productive and equal conversations about race and anti-racism in their household and communities.

In many South Asian American households the topic of race is often overlooked or misunderstood and as such, important conversations about race are often neglected or undervalued. Additionally, when these conversations do take place, their progress and outcome are often variable and unproductive due to a variety of factors from a lack of awareness or ill-suited language.

Who is our user?

who actively seek out resources to develop their and their community’s understandings on race and racism in America.

More accessible resources on and about race and racism covering a wide base of topics from its roots, infrastructures promoting racism and microaggressions

How might we make the current resources provided by Desi Discourse more accessible in terms of usability, comprehension and language?

Based on feedback from User Interviews, the team realized that to make Desi Discourse’s resources more accessible improvements to the websites needed to be made to make it more user friendly and allow the user to locate, consume and digest the available resources more quickly and efficiently.

We first came together and identified key components of the website that needed to be updated among which was the landing page which had no mention of the Desi Discourse Conversation Guide and solely talked about the Podcast. Additional content was added to the Conversation Guide including anecdotes from interviews and the podcasts.

These ideas and improvements were then collated and adopted into the final design of the website which is linked here. 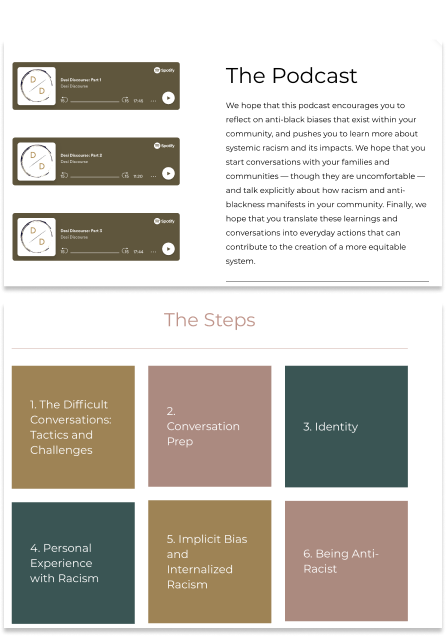 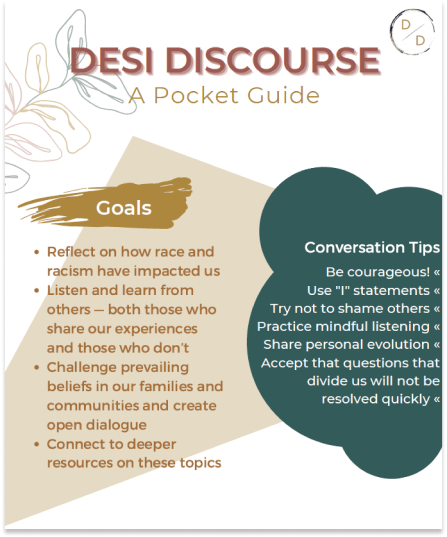 How might we make a resource that is a more active tool to use during discussions in addition to the existing Conversation Guide?

OIt became clear that while the existing Discussion Guide is incredibly useful and versatile, it was difficult to reference quickly especially during these conversations. With the current guide it proves difficult to use it as one would have to pull out a laptop and navigate through the website pages to find the necessary information.

The pocket guide was realized to be a pocket-sized tool to be used in addition to the full-sized Conversation Guide. The pocket guide was primarily designed for use on mobile devices and is formatted and styled as a continuous infographic. It condenses the details and information of the Conversation Guide into its most important information. The guide maintains the same structure as the original with concatenation of the introductory and preliminary pages.